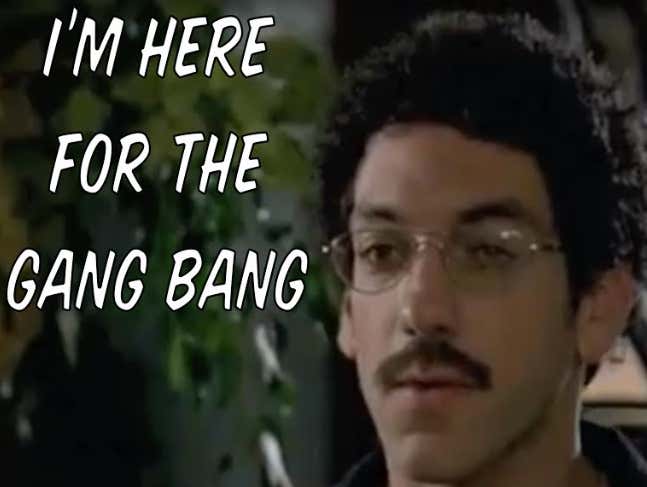 Before I get into the blog, you should know that I am in no way trying to paint gay bars in a negative light. As someone who’s been to hundreds of bars around the city, I can confidently say that in my experience the service, cleanliness, and atmosphere in gay bars is second to none. So don’t use this as your meter for judging an entire people. It’s just that this weekend was so horrifying that I feel like I have to tell you. Okay, now that the disclaimer is out of the way let’s get into the story.

I’ve never been much of a going out guy. I used to go out all the time when I was younger and cut back once I hit twenty-five. My hangovers are too brutal. That and I’m far too tall to stand up at bars. I have to either hunch over so I can hear what’s going on or zone out altogether. I usually choose the latter which defeats the purpose of me going out in the first place. So when I got the call to grab “a” drink last Friday I was hesitant but decided to go anyway.

We started at a Mexican place in the West Village around 6:30 for Margaritas. They ended up being so acidic (they were also $5) that we had to leave after one. We made our way across the street to an outdoor bar for some real drinks (Bud Light) and settled in. Once there, we invited more people who promised to meet us within the hour. Two hours later everyone showed up and we enjoyed a round before leaving to explore various other drinking establishments. Keep in mind that at this point it’s 10:00 PM, wayyyy later than my usual bedtime. I wanted to go home but dreaded having to do the whole awkward goodbye thing so much that I decided to stay out. To make matters worse we were going to the East Village. Which for those of you who are unaware is an absolute bitch to travel to. Going from the west side to the east side at night is like crossing the Atlantic Ocean- it takes forever, it’s dark, and the risk isn’t worth the reward. Despite it all, I decided to make the trek.

Shortly after arriving I could tell people were starting to fade. A few of them dipped out which I took as a signal that it was time to make an Irish exit. Just as I was about to leave I got a text from my friend sitting across the table, “Gay bar?” My heart sank. Not because I didn’t want to go, but because I knew it would extend my night by at least three hours. I reluctantly agreed and the three gays in the group broke off to do our own thing. Unfamiliar with the area we yelped a few options and landed on a place we’d never heard of. I’m not going to say its name, but I will say it’s named after a barnyard animal that rhymes with ‘the dock.’

When we arrived we were greeted at the door by man a who looked like Vito from the Sopranos. (Warning sign number one.) We paid the ten-dollar cover and walked into what turned out to be a completely empty bar. Eventually people began to file in. Except instead of staying in the main bar area they disappeared through a back doorway, which I originally thought was a smoking area. It wasn’t until we realized that people weren’t coming back inside that we started to think something was up. Eventually my friend asked the bartender where everyone was going to which he replied, “the party’s downstairs.” (Warning sign number two.)

We walked towards the back doorway everyone was passing through and stood at the top of a very steep, graffiti-covered metal staircase. At this point my internal alarm was going nuts. Why would anyone pile into a basement with a perfectly good bar upstairs? Again I chose to ignore my inner monologue and proceed down the stairs a la Aladdin entering the cave of wonder.

Except unlike the cave of wonder, it wasn’t well-lit and filled with treasure, it was pitch black and packed with dicks. The only light came from a red LED hanging from a wall. I was ten feet in when I saw my first phallus. It belonged to an older gentleman and looked like a button on a fur coat. We kept going thinking it was an isolated incident. Unfortunately, the further we got the more dicks we saw. Twenty feet in and it was like we were running a crucible of cocks. It reminded me of one of those football drills with the rubber dangly things.

It probably should’ve bothered me more than it did, but everyone was keeping their dicks to themselves so we carried on. I think alcohol may have blocked the absurdity of the situation from registering in our brains. For the most part, we thought it was funny. That was until I stood in what I thought was a line for the basement bar. Once I got towards the front of the line I realized people weren’t waiting for drinks. Well, one guy was, but he wasn’t craving alcoholic beverages. Turns out I was unknowingly standing in line was for a gang bang. I’m not going to get too graphic but I will say that both ends were being used and it was NOTHING like what you see in porn. For lack of a better word it was horrifying. The second I realized what was happening I sobered up faster than if than I jumped into a tub of cold water.  I turned around, grabbed my friends and we left. The images of that night will be forever burned into my brain.

So what did we learn here? First of all, never go to a basement party. Especially if it’s below a bar at 2:00 AM. Chances are nothing good will come of it. Second, follow your instincts. If something feels off, you’re probably right. And third, if you want to go to a gang bang, they’re much easier to find than you may think. All you have to do is find a restaurant thats name rhymes with the body part you’re interested in and you’re good to go. The more ya know. Happy Pride Week.