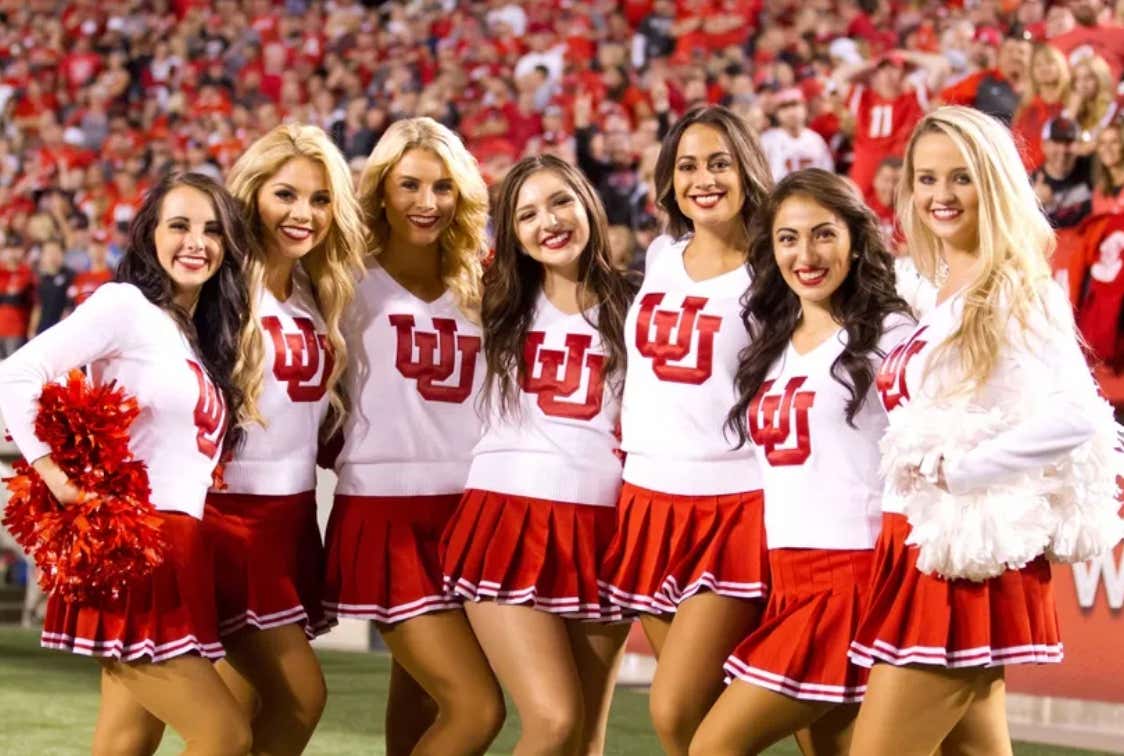 Similar to all major sports, a bunch of noteworthy news happens each week in college football, but it’s not noteworthy enough to write a full blog on it. No need to fill up the home page with blogs about the CFB bowl schedule being released. That’s what this weekly post will be for, some would call it a blog of misfits.

I have always been in the pro-bowls camp. When it’s December 22nd and there is nothing on TV except for midseason NBA games, I don’t mind a game between a 6-6 C-USA team and 7-5 Sun Belt team that I can put a little change on. If there’s a spread and a total, anything can be interesting. With that being said, this chart from @MattBrownCFB, is astounding: 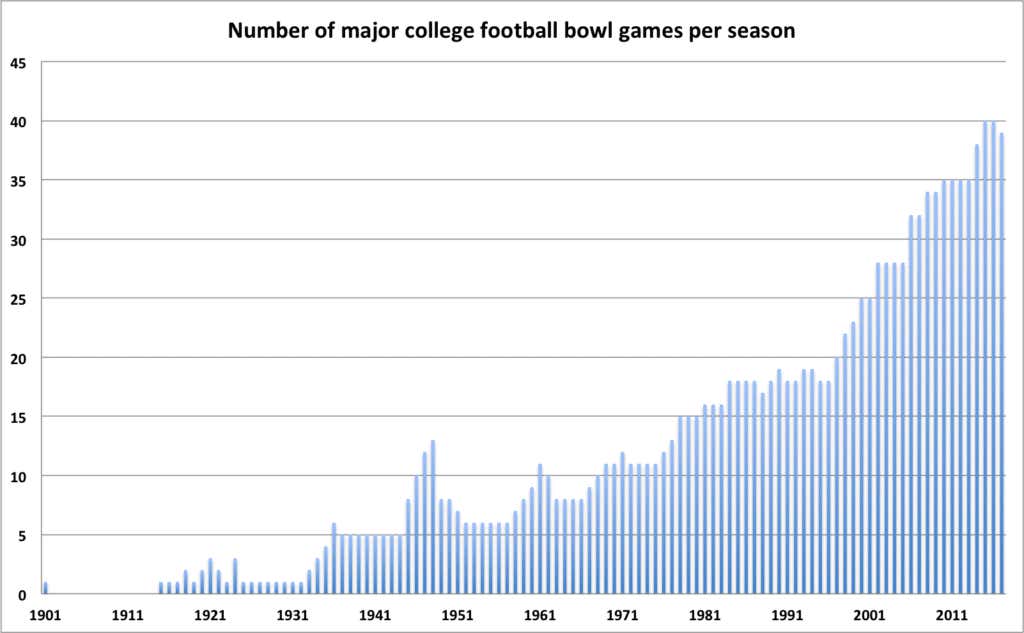 Bowl games are typically a positive. Sure, the stadiums are barely half-full most of the time, but TV ratings show a much better picture surrounding their popularity. For example, last year, every bowl had at least one million viewers outside of the Bahamas Bowl (started at 12 Noon the Friday before Christmas, still drew 880k viewers). The Las Vegas, Cactus, Birmingham, Armed Forces, Liberty, and Pinstripe Bowl all had over 3 million viewers. Compare that to the Washington Nationals-New York Yankees game on ESPN this Wednesday that drew 819,000 viewers. You can even look at the Sunday Night Baseball game on ESPN between the Indians-Astros on May 20th which drew 1.14 million viewers (note: WCF was on at same time). That’s lower than every bowl game last year outside of the Bahamas Bowl.

Bowl games are also a great experience for the players. They get to spend a week away from school, with their teammates, attend events and receive gifts without the NCAA up their ass. Players from G5 conferences get to play on national TV, often for the first time in their life.

However, you don’t want to over saturate the importance of bowl games. I’d estimate the best number of bowl games is around 36, that way just over 55% of FBS teams make a bowl game.

That being said, the old man yelling at clouds “THERE ARE TOO MANY BOWL GAMES” trend has been around since the dawn of time. Look at this quote from Huey Long in 1934, then senator of Louisiana:

The Athletic-“I’m getting mighty tired of these sports writers saying LSU “may be invited” here and “may be invited there.” That’s a lot of hokum, and we resent that “inviting” business. There’s too many “bowls” now — the Rose Bowl, the New York bowl, the Sugar Bowl, the Cotton Bowl and all the rest. “

“When they start inviting teams with four and five losses, there is something wrong. A bowl game should be a reward for a good season. … If I hadn’t already been fired (if I lost four games), I’d turn down the game and get to recruiting so we wouldn’t lose four the next season.”

Before the spring game, Coach O asked LSU fans to have “patience.”

Football Scoop-“I guess what I’m saying is that I never accepted the feeling of ‘Hey, we need to have patience.’ When you say that you need to have patience, aren’t you really just saying to your team that you’re not good enough? Because I want you to know something…I never took the field with the Tigers where I didn’t think that I was absolutely going to kick somebody’s tail, and that we were the best team. Period.”

Stop playing with my emotions: 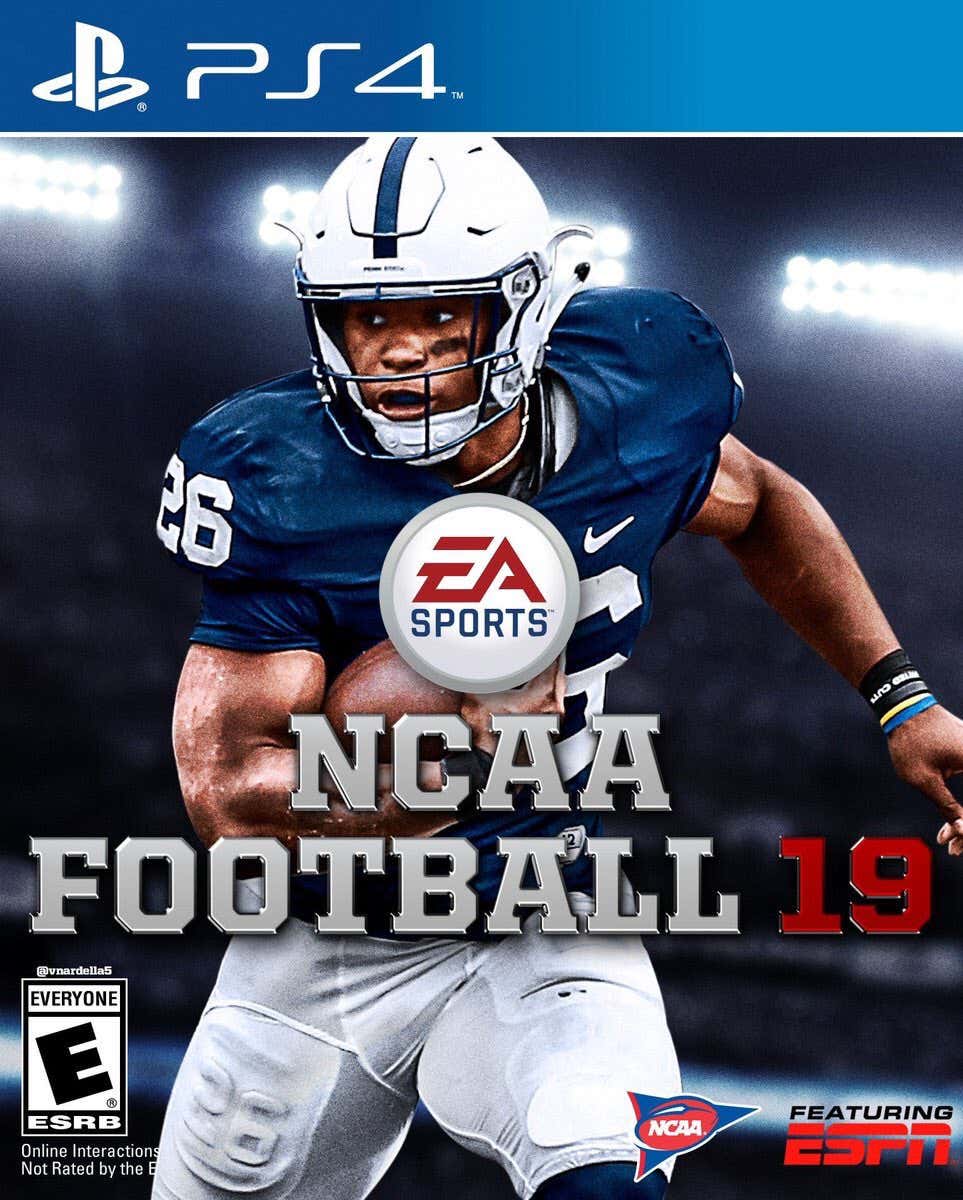 Big news out of Wake Forest:

Wake Forest’s first three games are: @ Tulane, Towson, Boston College. Losing Kendall Hinton will be a blow, specifically for the Boston College game. If Wake Forest gets out of that 3-0, they’ll be looking at another successful season.

Hate has no offseason, especially when it comes to dumb tweets:

On Wednesday, a Texas coach tweeted this out:

Weird to put that on a recruiting graphic considering it’s been 13 years since Texas won a national championship. Don’t take it too seriously, though. If every recruiting graphic showed a correct depiction of a program, every team would finish 12-0 on the season.

Telling Oklahoma fans not to take a perfect opportunity to chirp is a different story:

You may not know this, but Alabama Football invented the hose:

Getting really sick of these scholarship surprise videos:

Just kidding. They are awesome.

The Gazette-Everyone tested their vertical jumps around the same time. The room was bustling and then one of the coaches said, “42.”

“When you hear a coach say 42, that’s …” Stanley said. “Your jaw just kind of drops a little bit. It’s pretty special to be able to do that.”

A 42-inch vertical is elite territory, like among the all-time best at the NFL combine.

“It was a supercool experience, people were shocked,” Fant said. “I obviously want to beat that again.”

A question about dunking a basketball was the follow-up. And why wouldn’t it be? You want to know what a 6-5, 214-pound athlete can do to a rim and don’t pretend you don’t.

“I was more of a power dunker,” said Fant, who last played competitive hoops as a prep at Omaha (Neb.) South High School. “I did bring down a hydraulic hoop, so that was cool. I wasn’t a flashy dunker, windmill and all of that. I was more of a ‘break the backboard’ kind of guy.’”