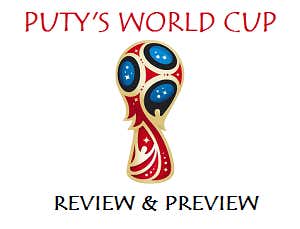 So the first day of the 2018 World Cup is officially in the books and, as I am hoping to do (just about if not) every day, I am going to run through a real quick recap of what happened – results and learnings, etc – and follow it up with a brief rundown of what you can look forward to tomorrow. Keep things brief short, keep them light, in and out so we can move on with our lives but still feel like we know what’s going on with the tournament.

[Programming note: I’ll include links to the preview blogs for all eight groups at the bottom of the post, along with the coordinates to the Barstool’s first and only soccer-specific podcast… big thanks to everybody who has subscribed/downloaded/reviewed (etc etc) and if you haven’t please do… or at least tell me you did so my sensitive feelings aren’t bruised.]

Anyway, I’m still workshopping the format so bear with me, but off we go…

There was only one game on the dance card this morning.

Oh dear lord this was ugly from the first to last whistle. You wouldn’t be able to tell from the scoreline but Saudi Arabia controlled more than 60% of possession.

The Saudis looked like a high school JV team for much of the game, coughing up the ball for no obvious reason and getting beat time and again on Russian counter attacks. The final score ended up flattering the Russkis, who scored twice in extra time to run up the score. (I would talk shit about it but it was a smart move since goal differential is the first tiebreaker if multiple teams finish even on points at the end of the group, so fair play to them.)

This was about Saudi Arabia being bad – really bad – more so than Russia being good, and yet some math nerds came up with an algorithm that decided the home team’s chances of finishing ahead of Uruguay and Egypt to win the group suddenly jumped to 60% based on that win alone.

Those silly geeks. Please leave the crappy prognosticating to the dummies masquerading experts (like me).

Learnings about Saudi Arabia: their FIFA ranking of #67 (worst in the tournament) may have been pretty spot on.

Learnings about Russia: not a whole helluva lot other than the fact they are better than a very bad and borderline atrocious team… and possibly:

As far as the deliciousness of group stage days goes, there will be few as tasty as tomorrow. All three of the games have potentially MASSIVE ramifications for the outcomes of Groups A and B… and (for better or worse) we should have a much better idea about how dumb some of my more controversial pre-WC predictions were by this time tomorrow. Yay? 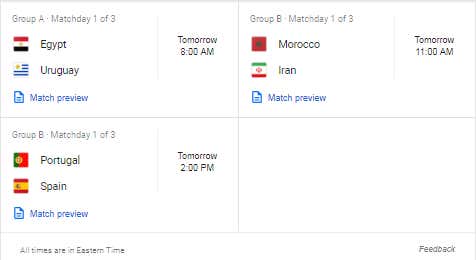 If you want more detailed explanations for thinking behind the following picks, check out the exhaustive (and frankly exhausting) previews I published over the past week – links at the bottom – where I went into a little detail about who I like and don’t like and why. But a quick and dirty run-through on shot in the dark scores that I’m going with for the games are as follows…

I’ve been outspoken about the fact I like Uruguay a lot coming into this tournament, and I suspect – despite what the Egyptian team doctors and coaches have been saying – that Mo Salah is NOT 100% healthy yet and will thus play either sparingly or perhaps not at all so that he can be rested for more important games against Russia and the Saudi JV squad. So I’m banking on the the combination of Uruguay being good and Egypt being not very good at all without Salah. Uruguay to win 3-1.

A lot of people haaaaaaaaaaaaaaated my prediction that Iran would get out of Group B ahead of Portugal and Morocco. That makes this game pretty close to make-or-break for both teams who could be thinking that three points here, a draw against Portugal and a close loss to Spain may be enough to sneak through to the knockouts. Despite the important of the game, I don’t expect it will be much fun for neutrals. This is one of those games that I could see going a LOT of different directions, but I’ll say Iran to win 1-0.

Wellllllllllll shit, hard to argue with inside info

A lot of people were also very mad online about me saying that Portugal – fresh off their win at Euro 2016 – have no chance of winning this World Cup, and in fact they could very well crash out at the group stage. Listen, I respect my some Ronny, I just don’t think their defense is up to pulling off another miracle run like two years ago. That said, a win over a slightly discombobulated Spain (and their newly minted coach) would go a long way towards shutting me the hell up. So it is possible? Mehhhhhh, nope. Spain to win 2-1.

So there we have it. I’ll try to get these blogs up a little earlier going forward but ran into some last minute complications today. (Life, amirite?) Thankfully the first game could be the least competitive of the bunch – unless Salah has been slow-playing us and is fit as a fiddle – and there will be plenty of time to read through this before the 11am ET and 2pm ET games.

PUTY’S WORLD CUP PREVIEW (presented by Barstool) – Groups A & B