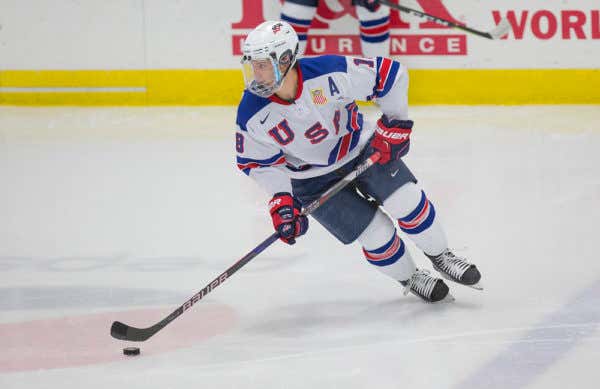 The first round of the NHL draft is right around the corner – next Friday night to be exact. First rounds haven’t really meant much in recent Rangers history up until last year. Not only did they actually keep their own pick for the first time in five drafts, but they pulled off a huge draft-day trade that netted them the 7th overall selection as well. Now they’re set up even better, owning picks 9, 26 & 28 along with a few names (Spooner, Namestnikov, Zuccarello) and later-round picks that could be part of a deal to move up from any of those spots. No franchise is positioned for more activity this weekend than the Blueshirts. Let’s look at a couple of interesting names that could be the first they call.

The soon-to-be BC freshman already has NHL size (6’1 205) & most scouts say he’s got a rocket of a shot to match. Strong, quick, nose for the net & excellent with the puck. Everything I’ve read about this kid has him pegged as Chris Kreider (another BC product) with a little less speed but a lot more skill & hockey IQ. That’s not a knock on Kreids. His game is predicated on power. Wahlstrom has a similar mindset as far as playing an “in your face” type of strong offensive game but you’ll never hear Kreider described as a “flashy puck wizard” or having “elite puck skills”.

Seems like he’s got the potential to pull a Clayton Keller one-and-done at the college level before going pro. More polished & less of a project than other prospects. There’s very few mocks I’ve seen that have him making it past the Hawks at #8 & it looks like his stock is rising (in large part due to a lack of elite forward talent depth). If Wahlstrom is available at #7, there’s no reason not to throw the Canucks a 2nd round pick to leapfrog Chicago & snag him. Vancouver is most likely looking at back-end help anyway that’ll be plentiful at #9. Otherwise, Wahlstrom might be nothing more than wishful thinking for the Blueshirts. But I really, really fucking wish.

Bouchard is a big (6’2 195) RHD who doesn’t necessarily have the “wow” factor that a lot of other defenders at the top of the draft have. He’s got average speed, isn’t flashy with puck and, like most draft-eligible blueliners, has a little work to do to defend against elite NHLers. Scouts love his puck management ability though & in today’s possession-driven style of hockey that goes a long way for a d-man. Bouchard thrives on making the smart pass in transition & is projected as a potential PP QB. He’s got a heavy shot which he fired a TON in the OHL this past season. His 297 shots were second-most among all skaters while his 87 points in 67 games were good for 6th.

London Knights coach Dale Hunter compared his captain to John Carlson who played under Hunter a decade ago. Makes sense. Looking back at Carlson’s scouting report he was dubbed a responsible, controlled, smart, methodical player with excellent instincts & he turned those immeasurables into an excellent career. Perhaps Bouchard can morph into something similar – but I’m leery on selecting a kid pegged to be a top-pair option of the future who’s biggest issues are skating & defending. I’d rather Noah Dobson, a younger 6’3 RHD who’s already great skater & defender, but he’s unlikely to be around. Perhaps the slight knocks on Bouchard aren’t as significant as I’m interpreting. Hopefully so, as Bouchard is the most popular mock pick to NY at #9.

Of all the consensus top-10 prospects, none seem to be losing their luster as much as the young Swede despite constant comparisons to Erik Karlsson. The diminutive (5’11 165) Boqvist is deemed an offensive juggernaut. He’s extremely mobile, a fantastic puck handler & has a great shot. As one of the youngest players in the draft, the righty dominated juniors but didn’t really impress playing in a couple of Swedish pro leagues – which isn’t all that surprising considering he’s just 17. All this could mean is that Boqvist will need more seasoning than the rest of the top D prospects who are all set to make an impact in a year or two. His lack of size isn’t doing him any favors either, although he’s got plenty of time to fill out some.

There’s tons of talent here but for impatient fans (like me) there’s plenty of other gifted blueliners who are a little more proven – which may explain why he’s slid in a few mocks. But if the draft shakes out where the Rangers “consolation” prize is a 17 year-old Karlsson clone I certainly won’t have an issue with it. With plenty of other kids in the system from last year’s draft & the trade deadline set to make their mark soon along with 9 other selections this weekend, the Blueshirts can afford to play the waiting game with such high upside.

This kid might shake up the entire top 10. Bob McKenzie recently said on his podcast that the 6’2 180-pound Finn could go as high as #3 to the Habs. That’s interesting because there’s no real reason for Montreal to get cute. Dahlin & Svechnikov are basically already picked ahead of them – whoever they want outside of those two is who they’re gonna get. So if Bobby Margarita heard that from a Montreal source then there’s some legitimacy. That’d push names a lot of good names down a rung for teams like NY picking afterwards. If the Canadiens end up going a different route, it’s still very likely that Kotkaniemi has climbed into the Rangers territory.

There’s a few question marks here, primarily about his skating. But the 17 year-old had a very solid season in the Finnish Elite League as a player his squad consistently gave important minutes all over the ice. He’s got the most complete game despite being one of the younger draft-eligible talents. The team that drafts Kotkaniemi will expect him to play up the middle but he’s also played plenty on the wing. He’s got that high hockey IQ scouts love & has drawn comparisons to names like Kopitar, Toews & O’Reilly in terms of two-way play. Although he’s a year or two away, this kid is gaining a pre-draft reputation as one of the safest picks there is. Sounds a lot like the surprise snatched at #7 last year.

The young Russian could be a surprise call if the Rangers have their sights set on a potential franchise forward with the 9th overall pick. If Wahlstrom & Kotkaniemi are gone along with Svechnikov & Zadina, the 6’2 185-pound Kravtsov may be the next best option in terms of scoring ceiling. I’m excluding Brady Tkachuk because, although he could be an excellent pro, he doesn’t have the pure offensive talent the others do. Kravtsov is a big, strong skater who can handle the puck & finish. He’s certainly more of a goal scorer than playmaker and surprisingly isn’t knocked for his defensive game.

Kravtsov started to make a bit of a name for himself when he became the youngest ever to score a KHL playoff goal as a 17 year-old. Last season, he was pegged into a third line role until the playoffs when he exploded for 11 points in 16 games. It’s a real small sample size but that performance as a kid among KHL men is extremely impressive & teams will want to buy low on this raw combination of size & skill. There’s no doubt he’ll spend a couple more years fine-tuning his toolbox over in Russia so, similar to Boqvist, this is a pick that won’t provide any immediate dividends. The Rangers shocked everyone a year ago reaching for their guy Lias Andersson. If there’s gonna be a repeat performance, Kravtsov could absolutely be their target if the draft shakes a certain way.

As you can see, I actually have no idea who they’re gonna take. I know I want an elite forward over a blueliner & Wahlstrom tops that list for me in terms of who could be available around #9. As the draft gets closer, mocks are being thrown for a loop & it looks like it’ll be a free-for-all after the second name is called. With all his ammunition, let’s pray Jeff Gorton can take advantage.