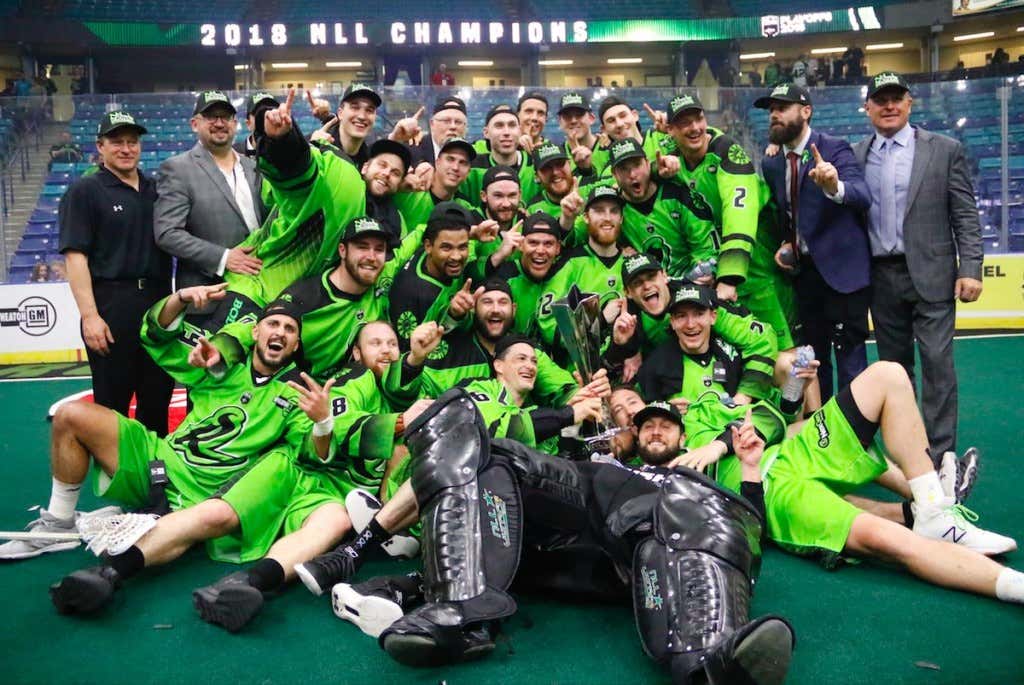 We’re of course talking about the Saskatchewan Rush winning the 2018 NLL Cup. Now there have been a few changes along the way. For starters, this is the first year with the new NLL Cup trophy. Before this, it was the Champions Cup. Secondly, they were the Edmonton Rush when they won their first championship in 2015. Then they won it again in 2016 as the Saskatchewan Rush. They lost last year to the Georgia Swarm in the finals but now Saskatchewan is back on top after taking down the Rochester Knighthawks in game 3 of the best-of-3 series.

So for those of you who have difficulty with counting and reading comprehension, that is 4 straight appearances in the Finals and taking home the hardware 3 of those times. That is dynasty status. And now for anybody who wants to be a smacked ass about it and say “is it really a dynasty if it’s in a sport that nobody cares about?”, just take a look at the barn in Saskatoon last night.

Lower bowl. Upper deck. The place was packed and the SaskTel Centre was rocking. I can guarantee you that there was more of a buzz in that arena last night than any Marlins game in the past century. So if you’re reading this blog right now strictly for the purpose of shitting on lacrosse, go kick rocks.

As far as the game goes, well Jeff Shattler was stinging corners all night and stuffed the back of the net 4 times. This one right here was pure lunacy.

And while Jeff Shattler was filling the back of the net, Mark Matthews can give you change for a dollar but it’ll be strictly dimes. He had 8 assists on the nightand this one was finished off with a goddamn beauty of a BTB from Marty Dinsdale.

8 assists on the night. EIGHT. What an absolute savage. The Rush won the game 15-10 and Matthews had an assist on over half the goals. In the final game of the season. Clutch Game Strong. And for those of you who don’t quite keep up with lacrosse but the name Mark Matthews sounds super familiar to you, it’s either because 1) He was an absolute animal at Denver or 2) He’s the guy who put up 2 goals and 7 assists in one game while battling a case of pink eye last year. No word on whether or not Matthews gave himself pink eye before the game last night but it certainly wouldn’t have been a bad idea.

So 4 goals from Shattler. 8 assists from Matthews. Another championship for the Rush. And a couple of survivors from the Humboldt Broncos bus crash were honored before the game.

But with the 2018 NLL Cup coming to an end last night, that means that we are officially entering the 2018-19 NLL season. Which means that the Philadelphia Wings are officially back, bitches. Congrats to the Rush and everything. 3 Championships in 4 years is an unbelievable accomplishment. But this is the city of Philadelphia. And here in Philly, we’re Dynasty killers. Doesn’t matter if you’re the British or if you’re the New England Patriots or if you’re the Saskatchewan Rush. All dynasties come to an end in Philly so I’m very much looking forward to the Wings vs the Rush in next year’s NLL Cup Final. Should be a great one.