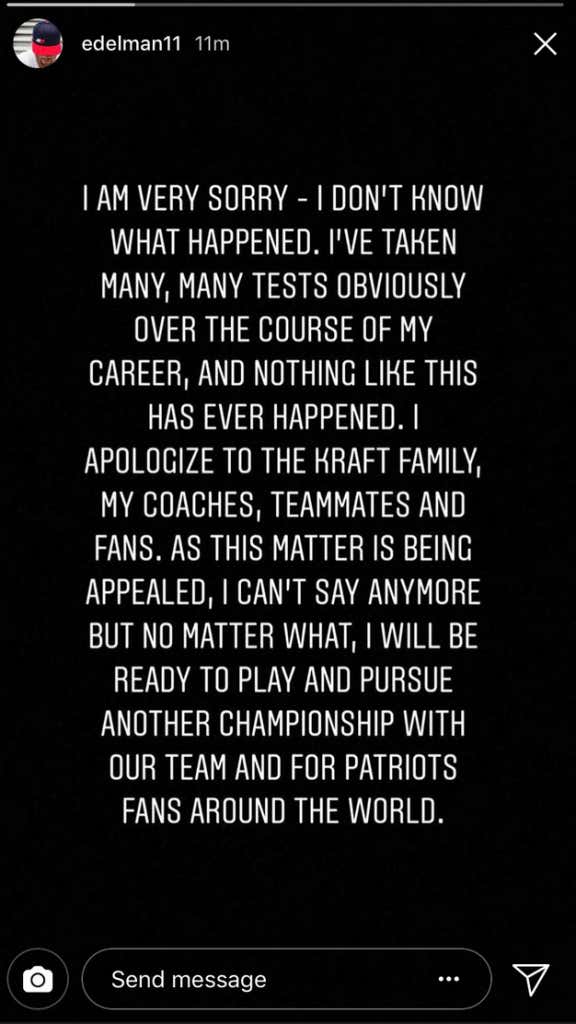 The Patriots WR broke his silence about his positive PED test today on his Instagram story. We still don’t know exactly what he allegedly tested positive for. Apparently neither does he. And he’s very sorry.

I know he can’t really say much, so this statement isn’t surprising. I semi-expected him to try to clear TB12 and Alex Guerrero’s names from the allegations. But the less said here, the better. Too much one way or the other would probably be admitting too much.

But I do love the “I don’t know what happened” stance though. It’s pretty genius. I’m mad at myself that I haven’t used it every time I’ve gotten caught for something I allegedly did wrong.

It’s pretty easy to see how this is going to play out for people who either love or hate the Pats. Regardless of what happens with his appeal, there will inevitably be people who use it to further the “Patriots are cheaters” narrative. There will also be people that would never believe he took them even if there was every piece of evidence proving that he did.

I personally hope the the NFL messed some shit up along the way and he’s cleared. But if his four game suspension is withheld (and I think it’s pretty rare for a guy to win a PED appeal), he’ll miss games vs the Texans, Jags, Lions and Dolphins.

The silver lining for Pats fans if he misses the first four games though? Gronk’s apparently not getting traded.

What a wild Friday on Patriots social media.