Bo Jackson is among the GOATs of two-sport athletes. He’s a legend. So naturally, it would make sense for him to give Kyler Murray — who is currently dealing with the unfortunate problem of being too good at two different sports — some advice on what he should do moving forward.

Kyler Murray was shockingly taken in the top ten of the MLB draft this week. He’s also set to take over for Baker Mayfield next season. While the OU QB, OU outfielder and now the number nine overall draft pick to the A’s says he plans to return to Norman next year, a lot of people are sharing their opinions on what he should do. (And he appears to be having fun with it) 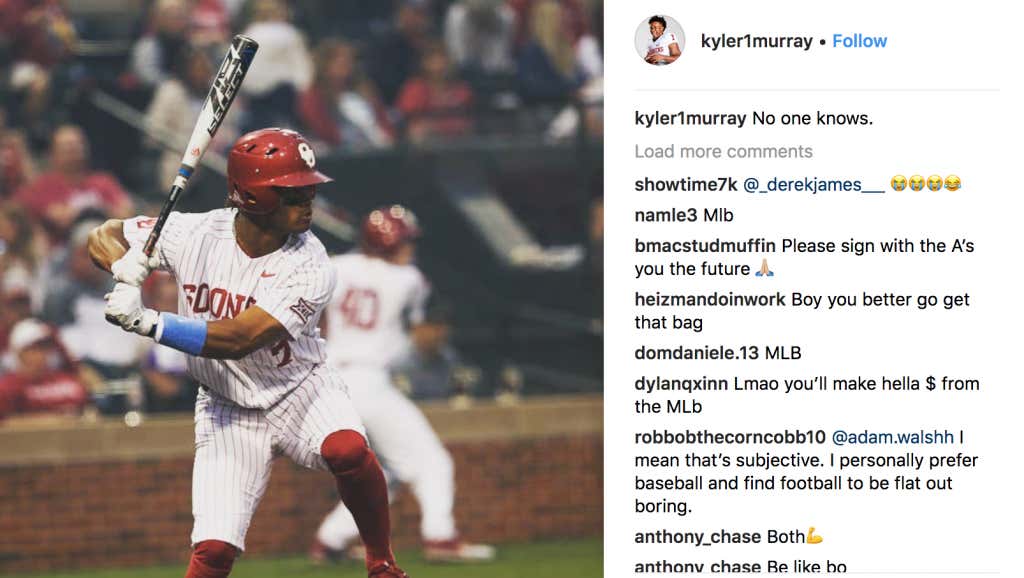 But for advice that’s worth it (and it should be worth a ton in this case), Bo Jackson thinks Kyler Murray should pick a sport and concentrate on it.

Via The MLB Network:

“The sporting world’s a little different now than it was when I played,” Jackson said. “They have more talent — way more talent. The talent pool is deep. I can’t tell the young man what to do. Whatever sport he chooses, concentrate on it.”

The advice is a little bit ironic, seeing as Bo Jackson is a household name because of how successful he was at football and baseball simultaneously. But nevertheless, he thinks Murray should pick one and stick with it.

Side note – If he actually HAD to pick one, I personally hope he’d pick football. But that’s solely because I love football, he’s fun to watch and I’m selfish. Yes, MLB money is guaranteed money. Yes, he could get hurt next year. Yes, he could technically sacrifice his entire baseball career to play one more season of football. But playing football just seems like more fun to me. Luckily for baseball fans, Kyler probably doesn’t give a shit what my opinion is.

By the way, the underrated part of the Bo Jackson quote is him saying that athletes in this generation of sports are more talented than when he played. He had every opportunity to say “well back in MY day” or “when WE played the game” or “these kids THESE days” and find a way to downplay the talent in today’s generation like so many other retired athletes do. But he didn’t.