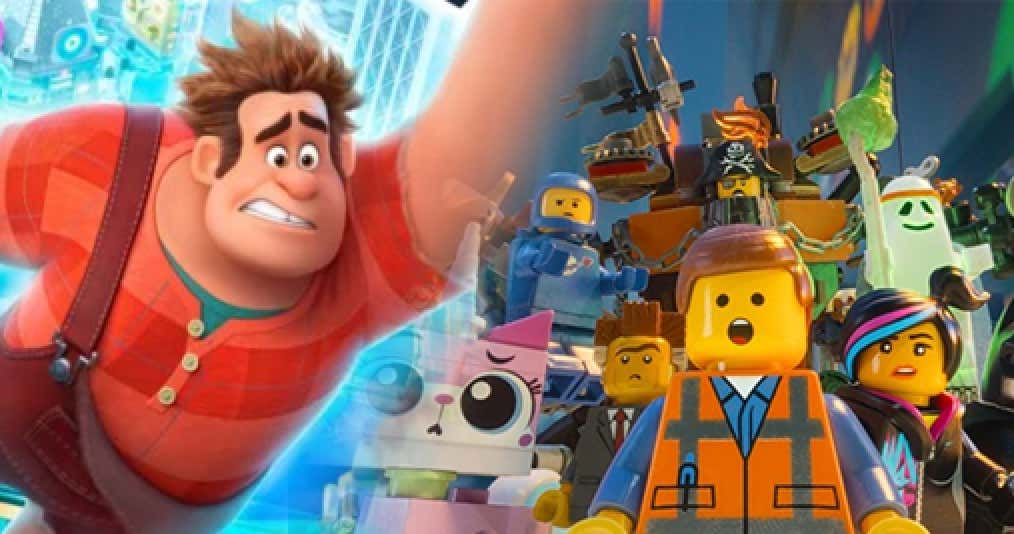 As Summer blockbusters begin hitting theaters, the trailers for Fall’s flicks are rolling out with ‘em, and last night/this morning gave us two animated trailers with a biiiiit of a strange similarity, but they’re both really great so whatever!

Kicking things off is ‘Ralph Breaks The Internet’, the sequel to 2012’s ‘Wreck-It Ralph’, Coley’s favorite animated film EVER!

Obviously as a paid Disney/Lucasfilm shill, that trailer really did it for me. I get that it’s product placement up the absolute ass and that this is essentially a commercial for a much longer commercial, but I’m COMPLETELY fine with that. The first one was kinda the same thing to a lesser degree, and if ‘Ready Player One’ proved anything this year, it’s that using a ton of intellectual property in a sorta pop culture vomit film can be done really well. Oh, and another recent movie proved that right before ‘Ready Player One’, and it’s called ‘The LEGO Movie’. Speaking of which, let’s check out the trailer for that one’s sequel!

Really fun trailer there, with all of the Mad Max vibes and stuff, and I’ve got no complaints…other than the fact that ‘The LEGO Movie 2: The Second Part’ comes out in FEBRUARY 2019! Why did they drop this trailer now? Was it a panic move because both films have a slightly similar narrative, so they didn’t want people to say ‘The LEGO Movie’ copied ‘Wreck-It Ralph 2’? We might all be dead by February 2019…not trying to be morbid, just trying to be honest. Who knows if a Super Volcano is gonna go off and block out the sun with its smoke and cover the Earth in ash before then? In New York I’m nowhere near any of those motherfuckers so I’m just gonna have to watch it slowly approach me from a distance while wishing for ‘The LEGO Movie 2’? Fuckin’ A, man. Don’t excite me about something I may not live to see!

Also, and I should’ve mentioned this at the start, but the similarity in these trailers is that both are pushing a narrative that women can do things too. Like we as men can do things, but women can also now do them. Pretty popular theme in all of pop culture right now, but if you’re anti-chicks you’ll probably hate both. Nevertheless, there’s a few thousand other flicks that completely dispel the “women can do things” narrative, so you could just check those out. Ladies is pimps too, though, so lighten up and let ‘em have a few.