Source - The couple injured in the crash, Alan and Margaret Hardman, both 65, of Winnemucca, Nevada, suffered some broken bones, cuts and scrapes, but are expected to recover.

“I’ll tell you what — I don’t know how we would have done it without them,” Alan Hardman told the Statesman. “They didn’t even hesitate.”

While driving back from winning the championship at the Bay Area Spring Football League Tournament of Champions in San Jose, the youth football team witnessed a rollover crash in front of one of the team’s vans on U.S. 95 in Oregon just south of Jordan Valley.

“We just saw basically dust fly up. We were probably 50 to 100 meters back,” Clay said. “You could see that they had flipped.” Clay said they were able to rescue the man who was trapped with relative ease. The woman, who remained conscious during the ordeal, was stuck. At first glance, the players and coaches weren’t sure how much they could help.

Clay and the linemen tried to push the car but were unable to lift it enough to help her get free. About 30 minutes later a second van holding 12 more players showed up, and that allowed the group to rescue the woman, Clay said.

The team was gone by the time people from the Sheriff’s Office arrived, Malheur County Undersheriff Travis Johnson told the Statesman. Because of car trouble, a deputy was unable to reach the crash until an hour after the initial call.

The chances of flipping your car are slim. The chances of flipping your car with an entire bus full of football players directly behind you? Slim to none. I hope Alan and Margaret Hardman bought a lottery ticket because it doesn’t get much luckier than that. I’ve never been in a car crash so I have no frame of reference as to how they felt. I have, however, been in a motorcycle crash but it pales in comparison to this. I skinned both my hands, hit my head, then went home and asked my mom to make egg salad. I think it’s safe to say I had a concussion. From the video it looks like one of the occupants was suspended by her seatbelt and the other was pinned underneath the car. You can kind of see her being yanked out by the guy with his ass in the air. 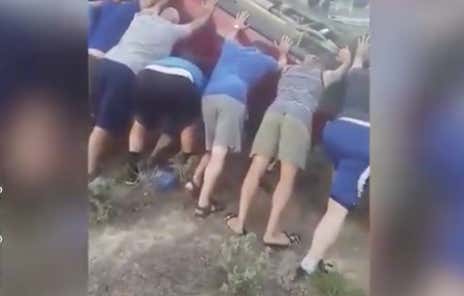 It’s a miracle that the bus not only stopped, but that the kids weren’t afraid to help. A lot of people will drive by accidents or walk by injured people on the street because they’re too afraid of a lawsuit. If someone has an injury and it gets worse because of a rescue attempt, they can sue the rescuer. It sounds crazy but it’s true. “Thanks for saving my life, see you in court!”

If you feel like crying check out this video of the couple being reunited with the kids who saved them. The whole thing makes you realize how quick life can change. That and how important it is to wear a fucking seatbelt. Regardless, it’s good to see some positive stories in the news. Cheers to these guys.