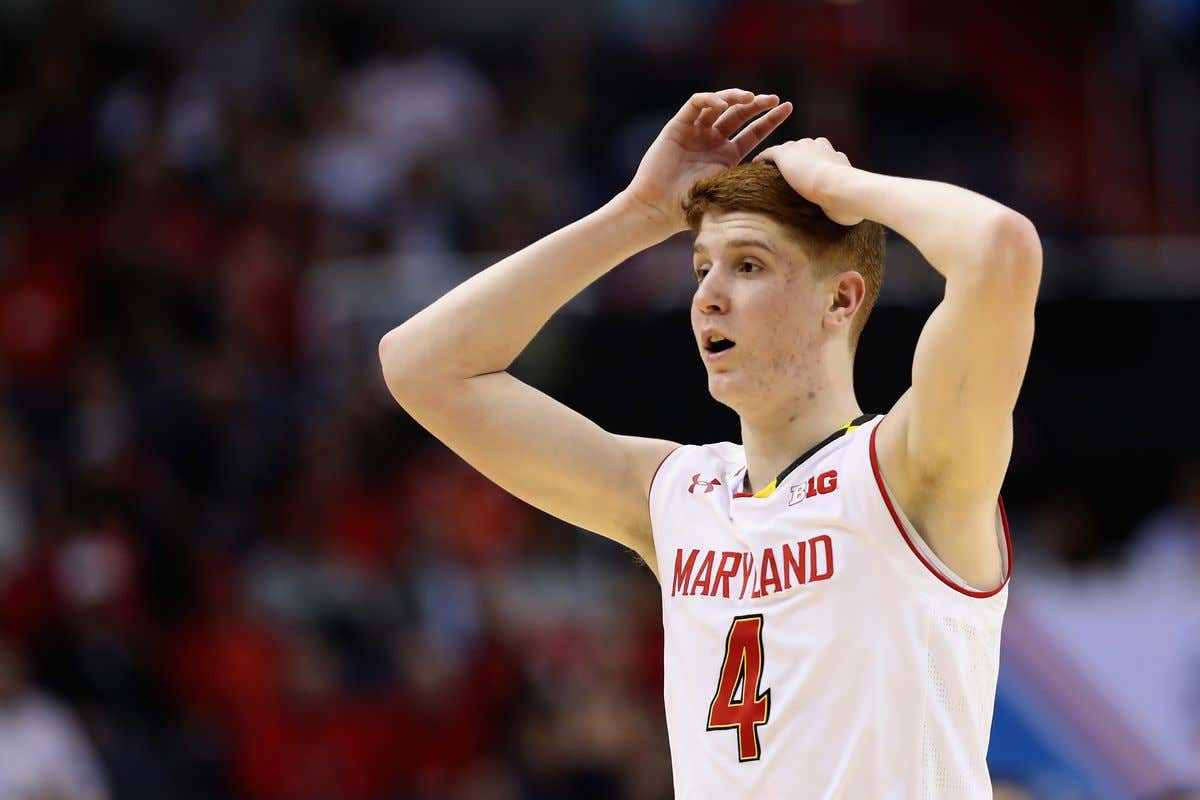 Yeah, but the problem here is I don’t think Huerter falls to 27. He’s one of the biggest risers this offseason and after the combine, but, yeah he makes sense to go to the Celtics at 27. He has good size to play the wing, can switch a bunch of screens and doesn’t need to constantly shoot to have an impact on the game. He’s an excellent passer and can fill in on the second unit, but again, I don’t think he falls to 27.

Reid Travis is now the guy who will change preseason rankings. The former Stanford player is deciding between Kentucky and Villanova reportedly for his grad transfer year. If he goes to Kentucky, they become the No. 1 team in the country. If he goes to Nova, they become a top-3 team in the country again. Now, I do think it’s closer than most people are reporting, but I still think Kentucky is the favorite here. My guess is he ends up there.

Again, I don’t really like to put ‘ceilings’ on teams because you never know how the NCAA Tournament matchups go. Last year we saw Syraucse get matchups that they used to their advantage and made the Sweet 16 and sent Clem to Vegas. Now, here’s the thing. Yes, they return all 5 players, but they also were one of the last four teams in the NCAA Tournament. That says more to me than making a Sweet 16 (as it does with other teams). I think they are a borderline top-25 team heading into the preseason and will likely spend time as a top-20 team and out of the top-25. As for the bracket draw, yeah, it’s important. If the matchup is against a team that doesn’t shoot a bunch of jumpers and doesn’t shoot them well it’s favorable. Plus, Syracuse slows the game down so much that it really limits how many mistakes better teams can make.

It’s not that a player like Nick Richards is disappearing from modern basketball, it was just the fact that he was so bad defensively last year. On top of that, his offense wasn’t nearly good enough to warrant keeping him out there with the lack of defense. If he can become a rim protector and strong defender, he’ll earn more minutes, it’s as simple as that. Richards actually has decent touch out to 15 feet and moves laterally decent for his size. It’s just a matter of how much he improves this offseason.

Yes, I would hate that hire right off the bat. Now, I’d give Smith a chance, but, yes I’d hate it. Here’s the thing. People have drastically undervalued Dwane Casey because of what happened in the playoffs. I’m not putting that on Casey entirely. Casey did lead the Raptors to the No. 1 seed in the East. He did turn them into a good organization. People getting upset that Casey is a lead candidate simply is just thinking of the playoffs.

I’d probably put St. John’s at 2nd or 3rd in my preseason Big East poll if that happens. The biggest question I have with St. John’s is can Chris Mullin handle all the talent and get the most out of this group? Mullin has been a mixed bag of sorts as a coach and this is his first chance (due to the injuries last year) to have something special at St. John’s. That Ponds/Heron backcourt would be one of the best starting backcourts in the country though. Heron announced he was going to St. John’s, but it’s still up in the air if he’ll be eligible for next season. Heron applied for a hardship waiver, which many think will get approved, but, you know, the NCAA.

I wouldn’t pick them to win the Big 10. I’m skeptical of Wisconsin being a NCAA Tournament team even with the return of Happ. We know who he is as a player and he’s a damn good player. But, we saw last year what happens when he doesn’t have a ton of help around him. They struggled mightily. Now, how much do these freshmen improve? I don’t think it’s enough to turn a 15-18 record into one that’s fighting for a Big 10 championship.

Crazy? No. But, it’s a little hot takey right now. That said, I think Bagley has been a bit undervalued since the season ended and we started looking at NBA Draft prospects. Both Bagley and Ayton are incredibly polished on the offensive side of the ball and can step out and stretch the floor a bit. I do think Bagley is better at taking guys off the dribble and has a softer touch on his jumper, but Ayton can be better defensively. Right now that’s the biggest question; who can adapt defensively to the NBA?

I’ve talked about MPJ quite a bit. For him and teams it all depends on how his medical records checkout with NBA doctors. I think he has the potential to be a star. I think he’s one of the 4 best players in this Draft when 100% healthy. But, just how healthy is that back? Are teams worried that the injury will come back in a couple of years? If I’m the Bulls though, yeah, MPJ is probably best player available, but he doesn’t fit exactly the best. You already have Lauri playing the stretch position, which is where Porter is at his best. I’d go with Young, who I think is actually a great fit for the Bulls, especially because you can hide him with Dunn. If Young isn’t there or you don’t want him, you go with either Mikal Bridges or Wendell Carter. They all fit better than MPJ, even though I think MPJ is the best player available there.