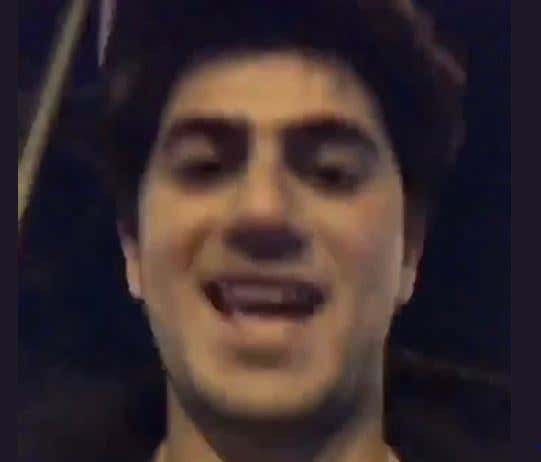 Ok so a video surfaced today of some idiot stalking Nate and hitting him with a pie in the face outside of Village Tavern from a couple months ago. Just a total asshole move to stalk somebody, hit em with a pie, make a video of it and then brag about it. Nate never told anybody it happened. I think he was sorta embarrassed by it and he didn’t know there was a video, but he shouldn’t be. I mean what else could he do? You get ambushed by a group of guys out of the blue and we’d all be stunned. So why am I talking about this right now? Well today a kid tweeted the video at me and it started picking up steam. This is the first anybody had heard of this incident besides Nate. The kid who posted it and his brother were sort of bragging about it. Now they are claiming they aren’t the ones in the video and had nothing to do with it. It’s possible. It could have been their buddies or whatever. Bottomline is I have no idea who did it. Nate wanted me to take the high road and ignore this, but they kept tweeting at him. Well the chains are off. I should be enjoying my weekend right now, but instead I’m sitting inside blogging about this. I need to know who the kid in the video is. Oh and if the kid in the video is reading this and I’m sure he will my advice is is to come forward. Not to sound cliche, but don’t make this harder than it needs to be.  I mean I’ve hunted terrorists before I think I can figure out who this douchebag is.  Bottomline is Barstool is a family. You randomly pie one of my guys like that and you might as well have pie’d me in the face. Now excuse me while I go enjoy my weekend, but I’m coming back on Tuesday and I’m bringing hell with me. It’s your move buddy.