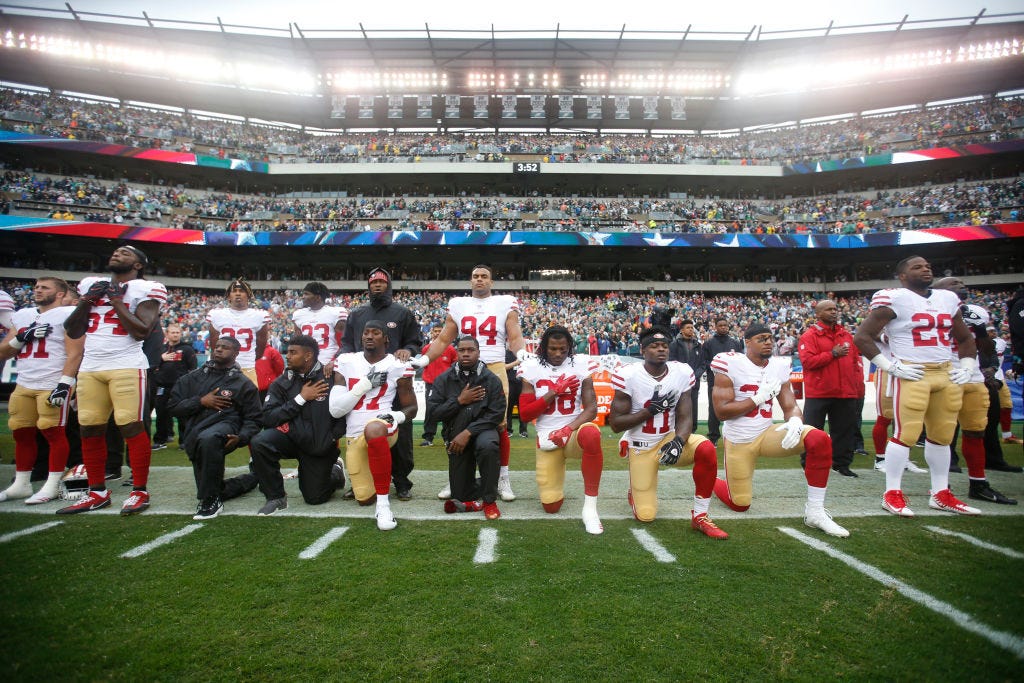 Time after time, the NFL has proven they don’t give a shit about their players until it’s too late.

The NFLPA had to fight in the last CBA for increased benefits for retired players – a fight that should have never been necessary considering the years of damage the game put on their bodies. Yet, every week we witness that damage happen to active players who, for the most part, take the field with an insanely unsubstantial amount of guaranteed money from the team’s owners who sit back in the comfort of their suites and take in the billions. And when the pain inevitably surfaces, highly addictive pain killers will be thrown around like candy as marijuana remains an evil, banned substance.

“This season, all league and team personnel shall stand and show respect for the flag and the anthem,” Goodell said in a statement. “Personnel who choose not to stand for the anthem may stay in the locker room until after the anthem has been performed.”

We’ve been talking about the purpose of the kneeling movement for years now, yet, somehow they still don’t understand what it’s actually about.

Kneeling was NEVER a disrespect to the flag or the anthem; it was a peaceful protest against the injustice that happens every day in this country. And it was a movement that originated from a conversation between Nate Boyer, a U.S. Army Green Beret, and Colin Kaepernick.

“We sorta came to a middle ground where he would take a knee alongside his teammates,” Boyer says. “Soldiers take a knee in front of a fallen brother’s grave, you know, to show respect.”

This decision was calculated and made with the clear intention to send a message without disrespecting those who have served our country and continue to do so each and every day.

To be clear, it was still a protest. And guess what? Protests are designed to make people uncomfortable. Not everyone is not going to agree on the method, the reasoning, and certainly not the cause. And that’s ok! We don’t all have to agree on everything! It’s possible two good-hearted people can both have very different viewpoints. It’s also possible two people can explain their side and both respect, but not necessarily agree, with one another.

“Personnel who choose not to stand for the anthem may stay in the locker room until after the anthem has been performed.”

Hahaha, this actually made me lol. “You go into your room until you’re ready to come out, apologize, and be a big boy.”

I’m sure that’ll go over well with grown-ass men.

Yes, the NFL is their employer and they absolutely have a right to pass this rule, but just because you can, doesn’t mean you should. This was the NFL’s opportunity to take a page out of the NBA  –  to be the good guy – and actually listen to their players. Or, at the very least, to listen and state their decision in a respectful manner.

Instead what we’ve known all along was firmly reiterated: they only give a shit about their image, not the people who’ve made them the $80 billion they’re worth.

N.F.L. owners, players and executives met last month to discuss the anthem issue. According to an audio recording obtained by The New York Times, players wanted to talk about Kaepernick’s case, while owners were more concerned about how to avoid negative publicity around the issue of kneeling during the anthem.

“The problem we have is, we have a president who will use that as fodder to do his mission that I don’t feel is in the best interests of America,” said Robert K. Kraft, the Patriots owner and a longtime supporter of Trump’s. “It’s divisive and it’s horrible.”

Divisive and horrible? What say you?