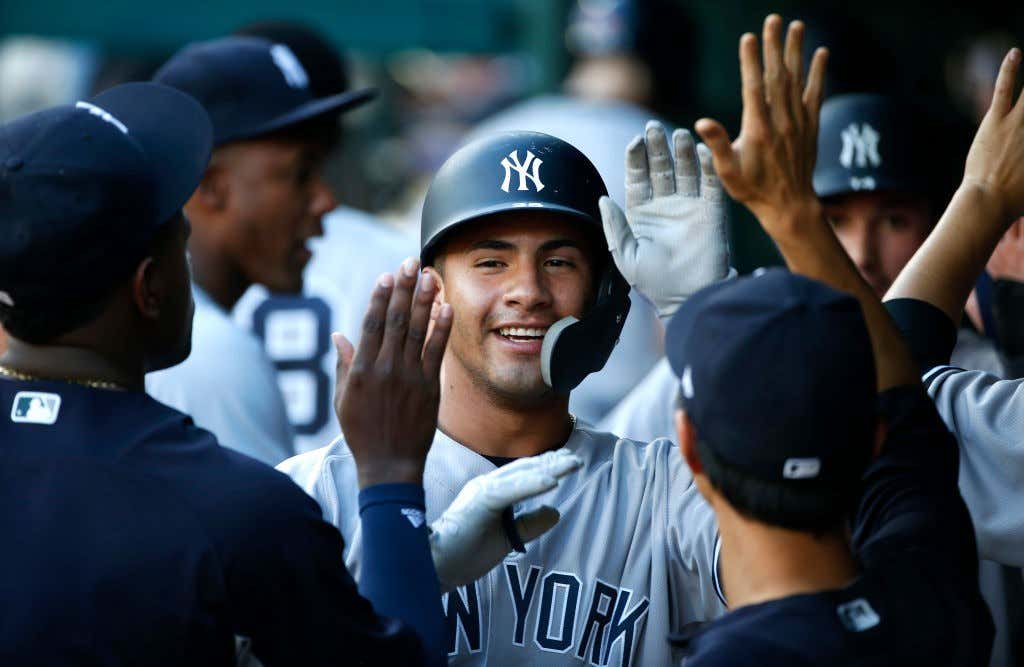 When Brian Cashman acquired Gleyber Torres from Chicago a few years ago, I don’t think anyone realized what we were getting ourselves into. Despite Cash’s efforts to get Kyle Schwarber in the deal, Theo was unwillingly to part with his “favorite player.” Gleyber was the second option and holy shit did we get lucky. Little did I know this man would be dominating the sport just a month into his major league career, as if he’d been playing for 10 years. The man is 21 years old and he’s just getting started.

In his second at bat, behind in the count 0-2, Gleyber was plunked by a Bartolo Colon fastball. I didn’t see much from Gleyber’s first home run that would warrant anything from Colon to do this, but he did come into this game with only four walks so it makes you wonder if there was any intent on the wild fastball. Nevertheless, Torres wore it and ran down to first with no complaints. He came up for his third at bat and blasted a ball to into the centerfield grass, giving him his first multi-homer game of his young career. Gleyber became the youngest Yankee to have a multi-homer game since some guy named Mickey Mantle. It was the 12th multi-homer game by a Yankee this season. It’s May 21st folks. That’s insane.

After the game, Gleyber was asked by Meredith if he thought there was any ill-intent with the hit by pitch.

You could see Torres get tripped up a little by the question. Seeing through his answers you could tell he thought there was a little something behind it and that the second homer felt pretty fucking good. Overall the kid is everything and more we could have hoped for. He sprays the ball all over the field, fields his possession at a Cano-esque level, and now has shown off this immense power where every home run he hits is absolutely crushed. Gleyber Torres hits 9th for this time and probably could hit 3rd for more than a handful of big league clubs. G Baby continues to amaze me.

There are other players on this team as well, including Aaron Judge who belted his 12th homer on the year.

Neil Walker and Aaron Hicks hit blasts as well giving the Yankees three straight games with at least four home runs. That has never been done in the franchise’s history. It’s never been done by any team in the live ball era in four straight games and New York will have a shot at that milestone tomorrow against Cole Hamels. Jesus. Christ.

Masahiro Tanaka didn’t have his best splitter tonight and when that’s the case he’s going to struggle a bit. He’s always good for one bomb when he pitches and when you factor in the Texas hot air he’s going to give up a few. Luckily Joey Gallo’s was only a solo shot, although with how far it went it could have counted double. Odor’s three run shot to tie it was tough to see, but like I said, when Tanaka doesn’t have the splitter going he’s going to have to grind it out. Fortunately this offense is stupid good and easily powered their way to the victory.

Switching back to positives, Didi Gregorius got a base hit tonight. Although it seems the only leg Carrabis has left to stand on is Didi’s slump, I’m seeing some good signs from our shortstop. In his first at bat he hit the ball on the fucking screws, it was just directly at the left fielder. Sure, it’s tough to see his average dip this low, but the rest of the lineup has picked him up big time without even blinking. This team is so good that a guy who had 30 RBIs and hit .327 in the season’s opening month can go this cold, and the lineup just continues to pummel opposing pitchers, even without his production. Didi is going to get out of this soon, and tonight’s RBI double was a nice step in that direction.

In the minors tonight, Greg Bird and Clint Frazier were in the lineup for AAA Scranton. They both homered in their first at bats.

Boone said that Bird could be back with the team as soon as this weekend against the Angels at home. Neil Walker homered tonight. Tyler Austin has been on a scorching run lately. This team is ridiculous, and Greg Bird is actually coming back. What the hell do opposing team’s do when they see this shit? No one wants to lose their job or role so they just keep mashing.

I was really looking forward to Carrabis covering the Rangers beat tonight, but he seemed to have developed carpal tunnel syndrome after the Odor home run. Hope he’s good to go in the morning.